Will the EU’s carbon-market reform fire up gas demand in the power sector?

Here’s a question for you: which was the best-performing commodity price year-to-date? No, it wasn’t oil or gas. It is the EU carbon price from the European Union’s carbon market, the EU Emissions Trading Scheme (EU ETS).

Under the EU, ETS companies are given a certain number of allowances (EUAs) to cover their emissions. If a company emits more or less than their allocation, they can buy and sell EUAs in the open market. The 2008 financial crisis and ensuing recession in Europe led to a massive glut of EUAs, which resulted in prices languishing at around 4-8 Euros per tonne for the last 5 years.

Now that the EU has emerged from recession, and following the recent carbon-market reform, the EU is introducing the Market Stability Reserve (MSR). MSR will come into effect in 2019 and will act a bit like a central bank for carbon, removing surplus inventory at a rate of 24% each year up to 2023, and 12% thereafter. Around 1.7 Bn allowances were in circulation last year – almost the same as the 1.75 Bn tonnes of emissions from installations covered by the scheme. The scheme is likely to slash the number of EUAs in circulation to around 500m in 2023, a drop of 70%. Significant levels of fuel switching will be required to plug the supply gap. 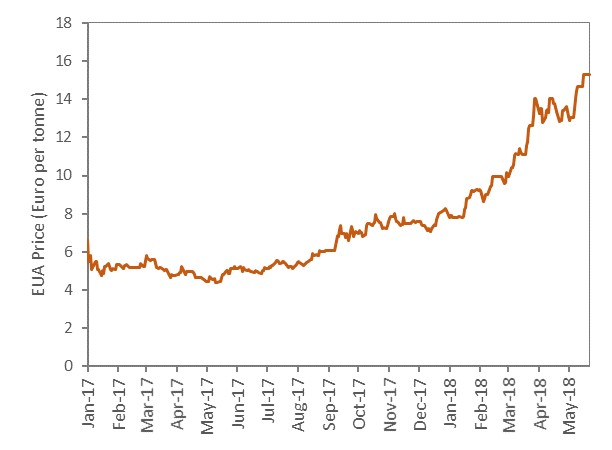 EUA prices have already started moving up in anticipation of the move. At about EUR 15/tonne, the price has doubled since January 2018, and trebled since May last year. Over the medium and long-term, prices are expected to go even higher. According to Carbon Tracker, a UK based not-for-profit think tank, the price of EUA is likely to reach EUR 20 in 2019 and EUR 25-30 in 2020-21, as the supply squeeze really starts to bite.

What this means for the future of coal? 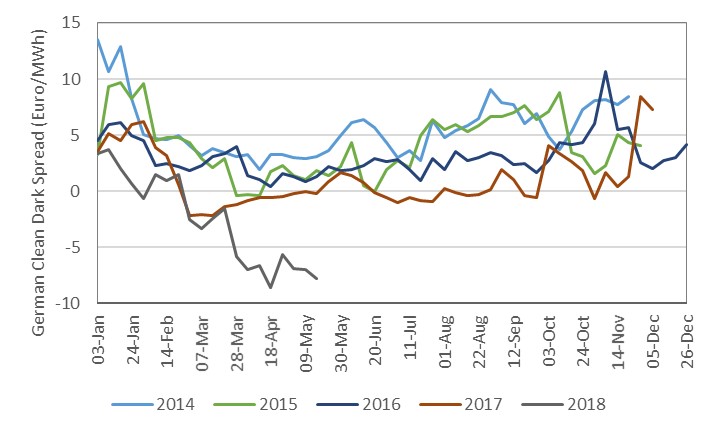 The rallying EUA prices coupled with rising fuel prices has put coal (and gas) generation margins under pressure. In Germany, the front-month clean dark spread for a coal plant (36% efficiency) was negative at minus EUR 7/MWh. With the carbon price favouring less carbon intensive fuels, life for coal plants is set to get much tougher. Coal emits roughly twice as much carbon as gas. Higher carbon prices will force coal and lignite plants – even the most efficient – either out of business or lower in the merit order. At the same time, carbon prices also penalise gas versus increasingly competitive renewables.

In the short-term to 2030, there will be a major switch from coal to gas. Carbon Tracker, in a new report, Carbon Clampdown: Closing the gap to a Paris compliant EU-ETS, predicts Italy, Spain, Germany and Netherlands will see the biggest impacts on their coal fleet. The UK will be less affected, it has largely phased coal out of the power mix through the GBP 18/tonne Carbon Price Support – a tax on CO2 emissions from electricity generation in addition to the EU carbon price.

In our recent Gas Matters article, Germany’s failed ‘energy transition’ re-ignites coal versus gas debate, we highlighted the struggle of countries that rely heavily on coal for power generation in meeting GHG emission targets. EU’s carbon-market reform and the need for emission abatement, may just provide the spark for the European power sector to transition from coal to gas – at least in the short term. 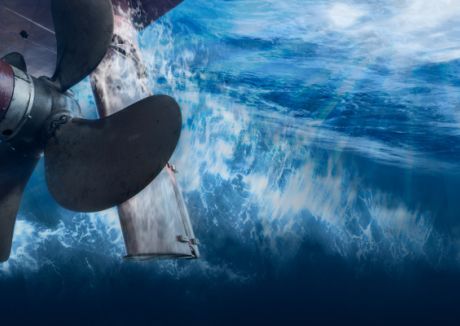 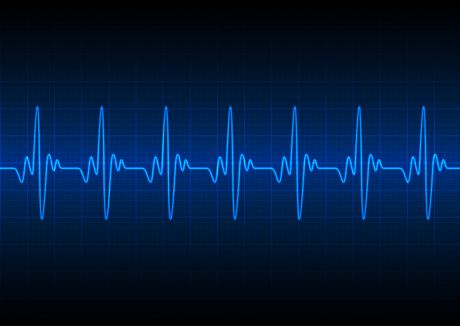 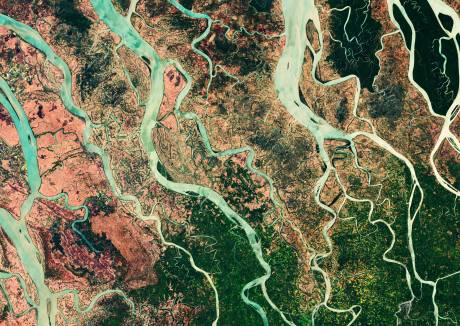 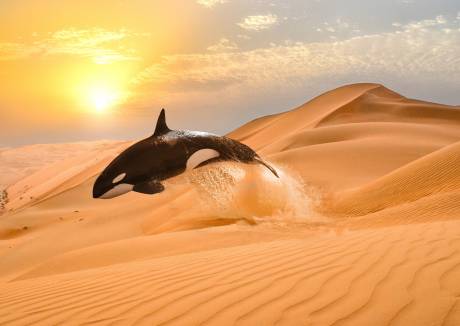 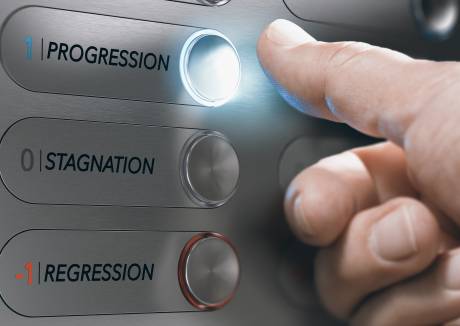 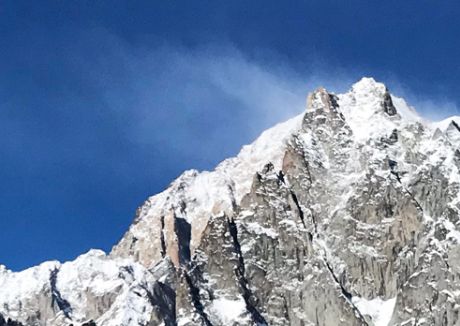