European gas prices bounced back on Tuesday, lifted by a strengthening carbon price and a technical rebound after a sell off on Monday.

The month-ahead TTF and NBP contracts rose by 1.9% and 2.5% respectively on Tuesday, with the UK gas benchmark returning to the USD 12/MMBtu range.

The rally was pinned on a technical rebound following a hefty sell off on Monday, with the strengthening European carbon price also offering support. The July-dated carbon contract rose by 2.2% on Tuesday to return to the EUR 52/tonne range, with the contract rallying ahead of the EU releasing its climate reform plans on Wednesday.

Whilst gas prices in Europe strengthened, prices in Asia and the US fell. Asian LNG marker JKM recorded a minor loss to settle at 12.97/MMBtu. In the US, Henry Hub remained in the USD 3.7/MMBtu range despite a 1.4% loss.

As for coal, prices in Europe soared on Tuesday amid a tight supply outlook, with the API2 coal contract closing 3.5% higher at USD 131.5/tonne. Civil unrest in South Arica has hit coal exports to the global market, with exports from Indonesia disrupted due to rising Covid-19 cases in the country’s coal mining regions.

Brent and WTI both bounced back on Tuesday, recording gains of over 1.5% after the International Energy Agency (IEA) warned of the prospect of a tighter supply outlook going forward following OPEC and its allies failing to reach an agreement earlier this month regarding increasing production further starting in August.

The front-month Brent contract bounced back to settle in the 76/barrel range, with the US benchmark returning to the 75/barrel range. 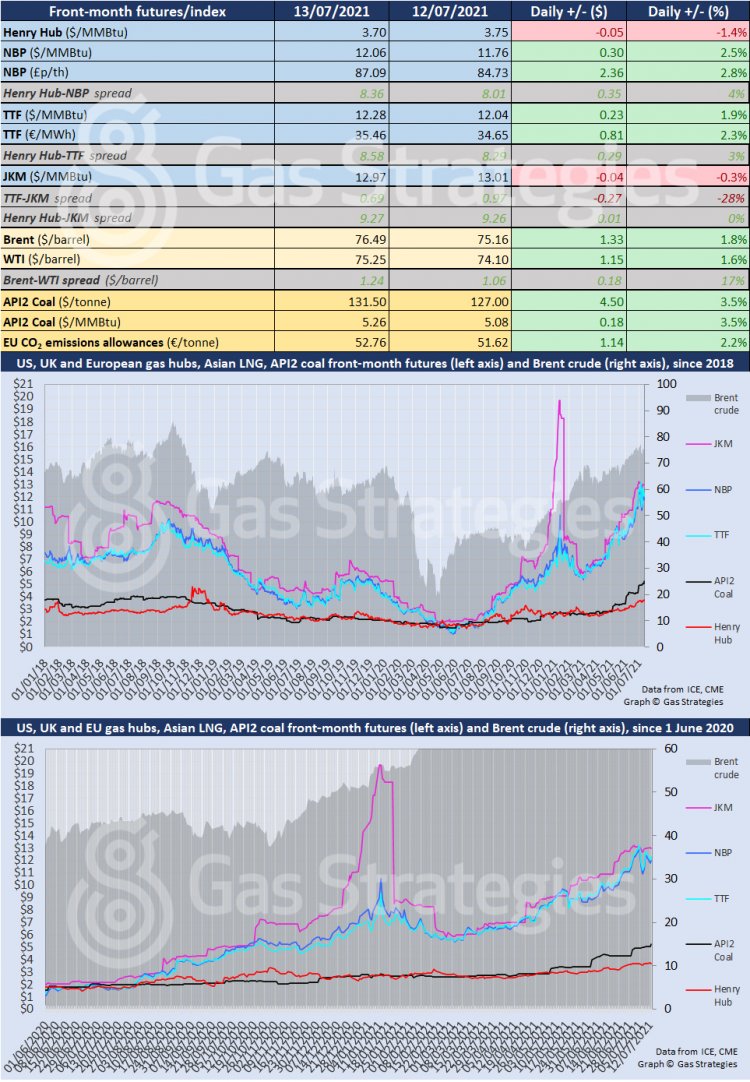