Crude prices tumbled by over 2% on Wednesday amid reports suggesting that Saudi Arabia and the United Arab Emirates (AUE) have reached an agreement regarding production quotas, which should enable OPEC and its allies to increase production – a move which will ease fears over a tight supply outlook as demand continues to recover.

Crude prices have been yoyoing since OPEC and its allies, collectively known as OPEC+, failed to reach an agreement regarding raising production starting in August.

The UAE opposed the plan announced at the crude cartel’s latest monthly meeting held at the start of July, with the Emirates reportedly believing its proposed production quota was too low.

However, an OPEC deal to raise production is now in sight, with reports suggesting the UAE and OPEC’s de-facto leader Saudi Arabia have reached a compromise over a deal. Saudi will reportedly revise the UAE’s baseline production level.

OPEC had proposed increasing production by 400,000 barrels/d each month from August through to the end of 2021. The proposal is likely to remain unchanged, however the UAE’s baseline production quota will be revised higher. The proposed deal will need to be cleared by the other members of the OPEC+ alliance.

A deal by OPEC to raise production will ease growing fears of a tight supply outlook, with the International Energy Agency (IEA) having recently called on the cartel to bolster production in order to alleviate a tightening supply outlook as demand recovers.

Also weighing on crude prices was news from the US Energy Information Administration which reported that gasoline demand in the US fell last week.

As for gas, prices in Europe and the US fell on Wednesday.

European prices fell amid profit taking and lower demand, with the month-ahead TTF and NBP contracts falling by ~2%. The UK gas benchmark slid back into the USD 11/MMBtu range.

The European carbon price, which has been rallying amid strengthening gas and coal prices, ticked higher on Wednesday, closing 1% higher to close in the EUR 53/tonne range. Gains were limited despite the European Commission (EC) releasing its “Fit for 55” climate proposals.

Under the proposals, the EC has called for major reforms to the Emissions Trading System (EU ETS), however these were expected due many of the proposals having been leaked in the last month – possibly explaining the limited gains on the front-month carbon contract.

In the US, gas benchmark Henry Hub slipped by 1% to fall back into the USD 3.6/MMBtu range.

As for Asian LNG marker JKM, the front-month contract recorded a minor rally. 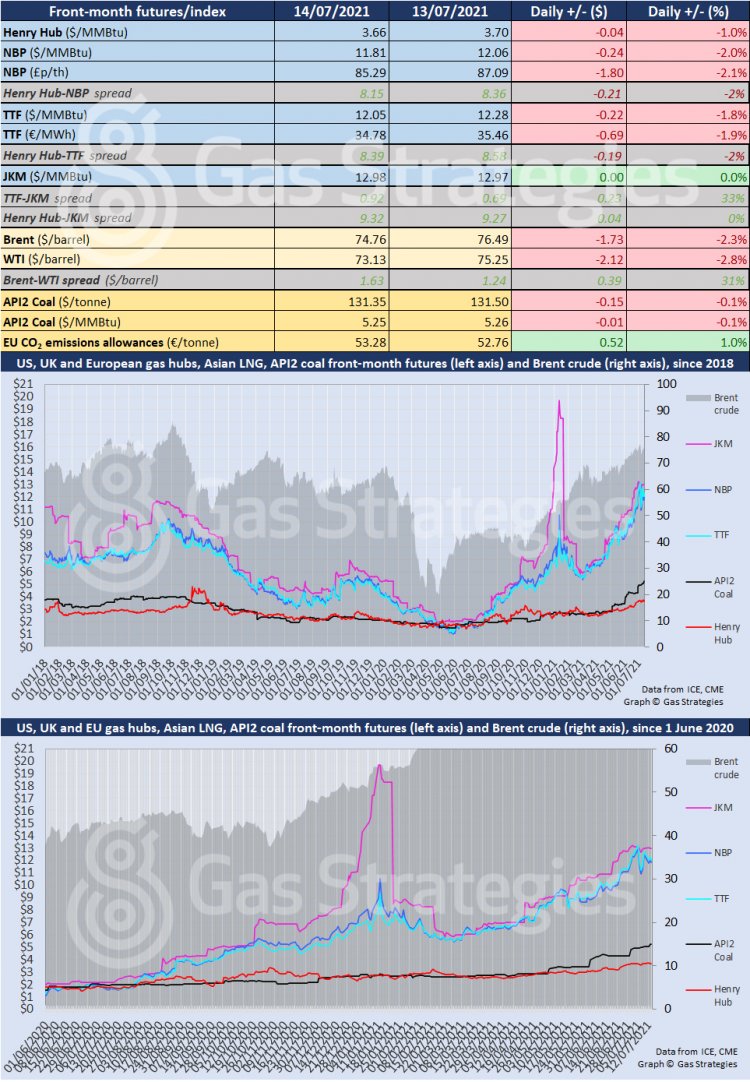