The front-month TTF and NBP contracts fell by ~11% on Thursday after nine days of gains. The benchmarks closed at the equivalent of ~USD 21.8/MMBtu.

Profit taking played a part in the price collapse, with a stronger pipeline supplies also helping end the bull run.

This week has seen some demand destruction due to record gas prices in Europe, with fertiliser producers Yara and CF Industries announcing that they are halting production at sites across the continent due to soaring gas prices. Further demand-side response could help lower European gas prices.

That said, prices may spike again in the short term as Europe’s gas storge levels remain below the five-year average ahead of the winter withdrawal season next month.

The price plunge on Thursday weighed on the European carbon price, which fell 0.9% to close at EUR 59.26/tonne.

Whilst TTF and NBP collapsed, the JKM front-month contract remained unchanged – at USD 19.02/MMBtu – as the October contract is about to expire. The losses by TTF and NBP saw their premium over JKM cut to ~USD 2.8/MMBtu.

In the US, the front-month Henry Hub contract fell from a seven-year high, closing 2.3% lower at USD 5.34/MMBtu.

The loss was pinned on a larger-than-expected injection into US gas storage and forecasts of cooler weather.

There was an 83 Bcf build in US gas storage for the week ending 10 September, the US Energy Information Administration (EIA) reported yesterday. Analysts had expected an injection of ~70 Bcf last week, according to reports.

In addition to the storage build, lower feed gas volumes to US LNG plants also weighed on Henry Hub. Freeport LNG remains offline due to power issues following Hurricane Nicholas. Flows to the facility fell from ~1.9 Bcf/d on Monday to 0.26 Bcf/d on Thursday, according to data compiled by RonH Energy.

Production outages in the US Gulf of Mexico, which have been supporting US oil and gas prices, remain in place across the US GoM following Hurricane Ida which made landfall in Louisiana on 29 August.

Oil prices remained steady on Thursday. Brent was up 0.3%, with WTI remaining unchanged. 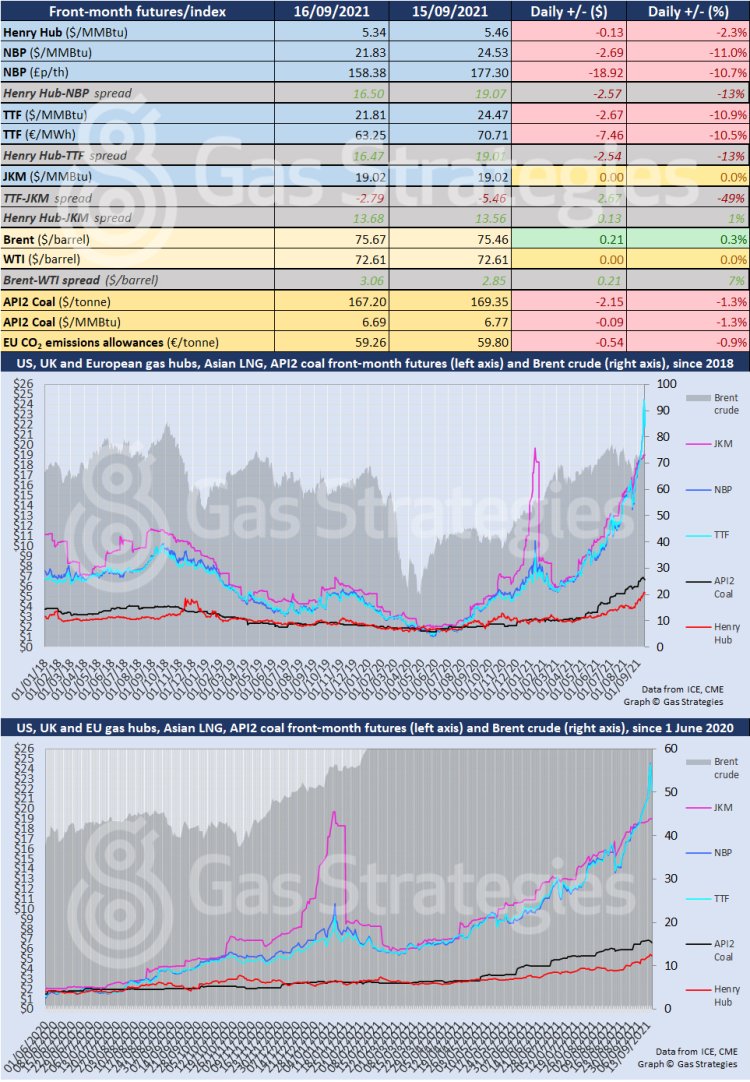