Crude prices plummeted on Monday, falling by ~USD 5/barrel amid fears that OPEC’s deal to increase production could result in a supply surplus as Covid-19 cases continue to rise globally, which could hit oil demand.

The September-dated WTI and Brent contracts recorded major losses on Monday, with both settling below the USD 70/barrel mark for the first time since June and late May, respectively. Monday’s loss also marked the largest single day loss by the crude benchmarks since March.

Prices plunged after OPEC and its allies reached a deal on Sunday to increase oil production starting in August. The agreement has eased fears of a tight supply outlook, with increasing Covid-19 cases globally also weighing on prices on Monday. Some market observers fear that there could now be a supply surplus over the second half of the year if Covid-19 cases continue to rise, as this could dent demand.

Under the agreement reached on Sunday, OPEC+ has agreed to increase production by an additionally 400,000 barrels/d, starting in August, with the monthly increases to continue through to December 2022.

As for gas, prices in Europe continued to rise amid a weaker supply outlook and strong gas prices in Asia.

The month-ahead TTF and NBP contracts rallied by over 2% on Monday, with NBP returning to the USD 12/MMBtu range.

The Asian LNG marker JKM was unchanged, with the August-dated contract remaining at USD 12.97/MMBtu. However spot LNG prices in north-east Asia have recently been averaging over USD 13/MMBtu for September delivery, according to reports.

The strong gains by the European markers saw JKM’s premium over TTF cut to USD 0.64/MMBtu.

In the US, gas benchmark Henry Hub continued to rally, recording a 2.9% gain to close at USD 3.78/MMBtu. The gains were largely attributed to forecasts for warmer weather over the second half of July, which is expected to drive gas demand for air conditioning. 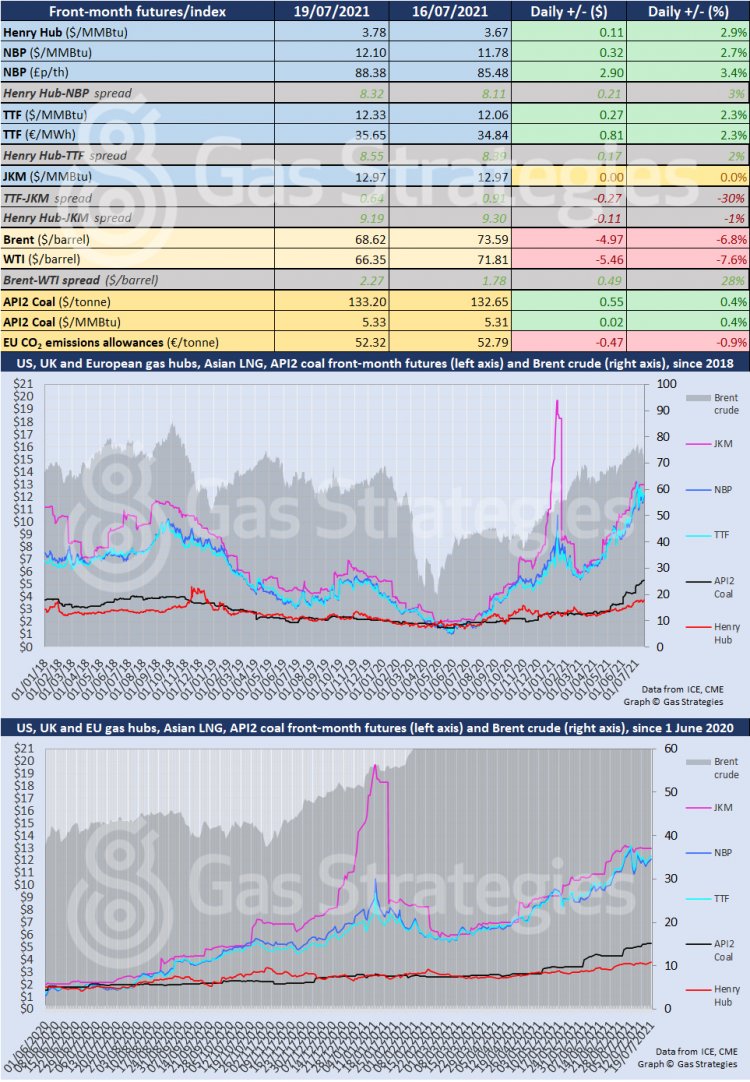