Oil prices continued to climb on Wednesday despite data showing US crude inventories increasing last week for the first time since May.

Wednesday’s rally by the front-month WTI and Brent contracts erased nearly all the losses the benchmarks recorded on Monday. Both crude markers rallied by over 4% yesterday, with WTI settling at USD 70.30/barrel and Brent hitting USD 72.23/barrel.

The rally was pinned on technical buying after an excessive sell off on Monday following news that OPEC and its allies agreed to increase production starting next month. The rise of Covid-19 cases globally also weighed on oil prices at the start of the week.

Wednesday’s gains came despite data from the US Department of Energy (DOE) showing US crude inventories increased by 2.1 million barrels/d for the week ending 16 July – marking the first weekly increase since May. Analysts had expected another drawn down on US storage.

However, prices ticked higher as the DOE data showed draws on crude products including gasoline and distillate for the week ending 16 July.

As for gas, US gas benchmark Henry Hub hit its highest close since December 2018. The front-month contract rallied by 2.1% on Wednesday to close at USD 3.96/MMBtu. Henry Hub has been rallying amid forecasts for warmer weather over the second half of July, which is expected to drive gas demand for air conditioning, and subsequently reduce the availability of gas for injection into US storage sites.

In Europe, prices continued to climb, with the month-ahead TTF and NBP contracts up by over 2% on Wednesday. The gains saw NBP return to the USD 12/MMBtu range. The UK benchmark has been rallying due to a tight supply outlook, amid lower domestic production and a lack of LNG imports.

Europe is struggling to compete with Asia for cargoes amid higher prices and strong demand in the latter, with the front-month JKM contract rallying by 2% on Wednesday to close at USD 14.31/MMBtu. 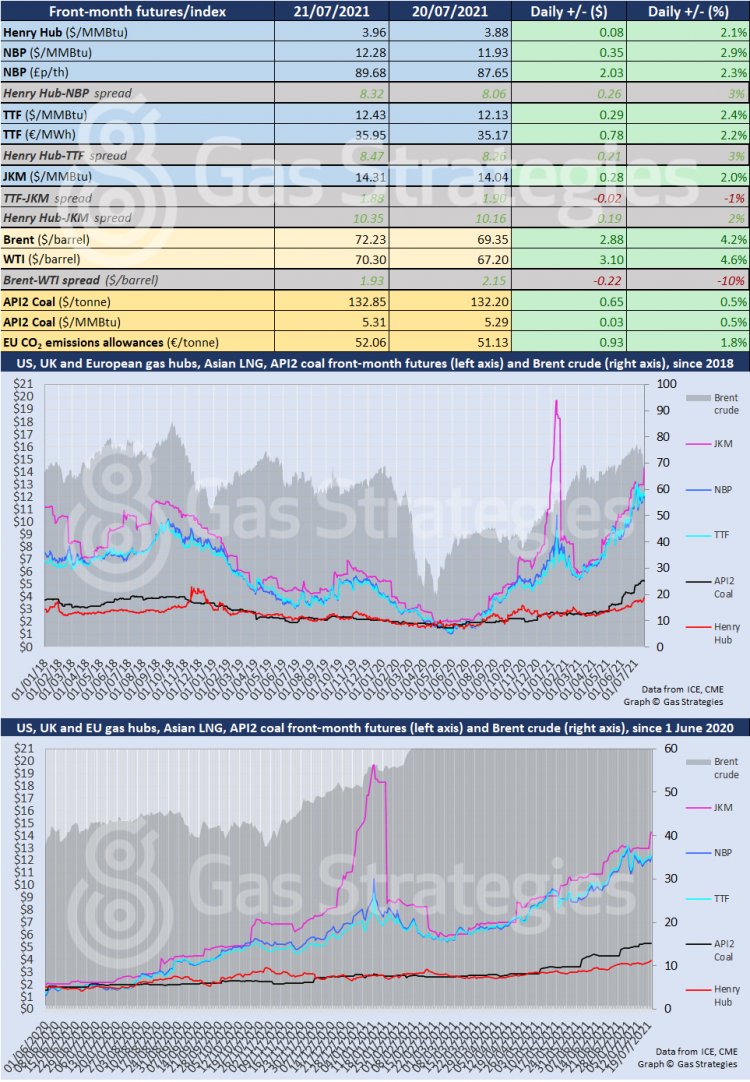