European gas prices soared to fresh record highs on Monday, pushed higher by the surging Asian LNG marker JKM. Gas prices in Europe look set to settle at fresh highs on Tuesday, with TTF and NBP rocketing during morning trading amid an unplanned drop in pipeline flows from Russia.

The front-month TTF contract maintained its premium over NBP on Monday after rallying by 8.8% to close at the equivalent of USD 26.24/MMBtu, USD 0.14/MMBtu higher than the UK gas benchmark.

Several bullish factors – including low gas storage levels in Europe and a record carbon price – are pushing European gas prices higher, however the main driver on Monday was the strengthening JKM price, with TTF and NBP trying to close the widening gap with the Asian LNG marker.

The November-dated JKM contract closed 6.2% higher on Monday at USD 29.2/MMBtu. Buyers in Asia – particularly China – have been stepping up LNG purchases ahead of winter, helping push JKM higher.

Whilst the November-dated JKM is nearing USD 30/MMBtu, the November-dated TTF and NBP contracts continue to lag the Asian LNG marker, meaning European buyers may struggle to draw cargoes away from the premium-priced Asian market in the coming months.

European gas prices could hit fresh record highs today as prices leapt during morning trading amid news that Russian gas flows via Mallnow unexpectedly fell by 50% during the early hours of Tuesday morning.

The surging gas prices in Asia and Europe pushed US gas benchmark Henry Hub to a fresh seven-year high of USD 5.71/MMBtu. The current price spreads will support US LNG exports –  which are expected to hit record highs this winter as new liquefaction trains are widely tipped to come online.

Bumper US LNG exports will leave less gas available for the domestic market, with supply concerns brewing ahead of winter due to storage levels languishing below the five-year average and no signs of US gas production ramping up.

The record gas prices in Europe also helped push the European carbon price to a record high of EUR 64.13/tonne.

As for oil, prices continued to climb on Monday amid supply concerns as demand continues to pick up. 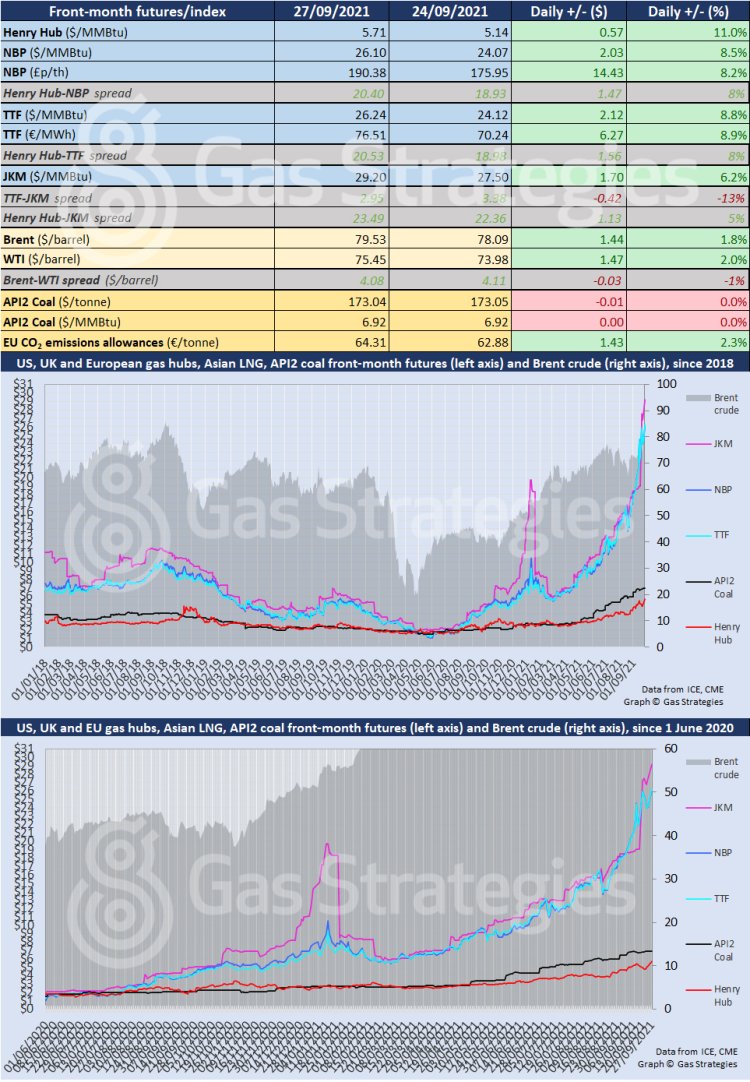