Wednesday, 18 March 2020 will go down in history as one of the steepest single-day US crude oil selloffs in history – which also saw US gas benchmark Henry Hub plunge to prices not seen in more than a decade. Month-ahead WTI futures crashed a staggering 24% – the contract’s third biggest day-on-day loss – to close at USD 20.37/barrel, its lowest closing price since January 2002. Month-ahead Brent was also punished, collapsing 13% to USD 24.88/barrel, amid forecasts of global crude over-supply accelerating in April just as demand implodes from coronavirus pandemic economic shutdowns across the US and Europe. Oil prices promised to recover some losses today, with Brent and WTI rising as high as 6% and 13% above yesterday’s extreme lows during intraday trading on Thursday morning (GMT).

Amid yesterday’s extreme stock market volatility, the British pound fell to USD 1.16 and EUR 1.07 per GBP as the US dollar index – a measure of the greenback against a basket of other currencies – soared above 101 points, a three-year high.

European natural gas hubs also remain depressed, with front-month NBP and TTF losing another 1-2% to close at the equivalent of ~USD 2.62/MMBtu. But with limited scope for further losses, the ongoing competitiveness of gas-fired power against coal could be threatened by the carbon price collapse.

In the US, natural gas benchmark Henry Hub crashed 7% yesterday to USD 1.60/MMBtu – its lowest closing price in more than a decade. The collapse is expected to weigh against US shale operators with gas-heavy portfolios, which enjoyed counter-cyclical gains last week on forecasts that a crash in associated gas output in the Permian due to the oil rout would boost wellhead prices for non-associated gas wells across other US shale plays. 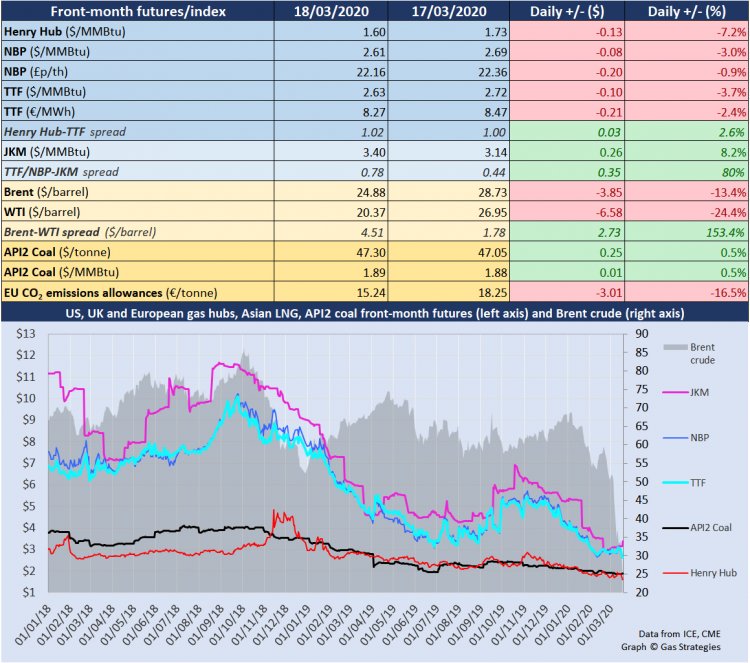