The US oil and gas market smashed through the looking glass on Monday 20 April 2020, when the month-ahead WTI crude price turned negative for the first time ever – and, separately, the price of US and UK natural gas futures swapped places. May-dated WTI, the principal US oil price indicator, crashed a staggering USD 55.90/barrel, or 306%, to close at negative USD 37.63/barrel on the day before the contract’s expiry, as speculative traders were forced to pay buyers to take long positions off their books.

The WTI price plunged through the floor when buy offers on NYMEX completely disappeared, after traders realised that physical storage for oil at Cushing, Oklahoma, will not be available to physically settle the financially traded volumes.

Market participants with available storage are said to have cornered the market, catching out long position holders – perhaps novice retail investors – who left it too late to roll into the June-dated contract. WTI contract holders must either settle their volumes physically at Cushing or roll their positions over into the following month.

The roll-over from an expiring front month contract into the next is usually a straightforward affair. But with physical storage fast running out, and inelastic demand and supply preventing an extreme imbalance from attaining equilibrium, the market settled at the expense of long position holders.

As the NYMEX trading window opened today, June-dated WTI – which becomes the front-month contract from tonight – fell as low as USD 16/barrel (down 22%) in intra-day trading on Tuesday. With the assumption that WTI cannot trade negative now lying in tatters, numerous commentators raised alarm at the possibility of the June contract also diving below zero – and possibly well before the month-end expiry date.

Global crude benchmark Brent has so far been shielded from this degree of volatility, since physical storage is not confined to one location but can occur in any market with oil infrastructure, and at sea on any available crude tanker. June-dated Brent is already the front month, and that contract fell less dramatically by 9% to close at USD 25.57/barrel yesterday.

But with Monday’s alarming events still rippling through markets, the June Brent contract slid another ~23% today and was trading at less than USD 20/barrel at 2.30pm BST on Tuesday. With VLCC crude tanker freight rates soaring and strategic petroleum reserves filling up around the world, no end in sight to Covid-19 lockdowns and no indication of near-term supply curtailing to the extent that oil demand already has, there is no guarantee that Brent will not follow WTI down the rabbit hole.

Meanwhile, the tailwind effect of the US oil flash crash is driving natural gas prices in highly unusual patterns.

Yesterday, May-dated Henry Hub shot up by almost 10% to hit USD 1.92/MMBtu, its highest closing price since 10 March 2020, as traders calculated that sub-zero priced oil will shut in scores of shale wells that also produce large volumes of associated gas.

In parallel, the May-dated contract on UK gas hub NBP yesterday shed more than 10% to close at the equivalent of USD 1.72/MMBtu. For natural gas to be cheaper in a net importing country such as the UK than in the US, a net exporter, points to extreme market abnormalities on both sides of the Atlantic – all of which is being driven, fundamentally, by the coronavirus pandemic.

Several factors are at play in the UK: the country is being flooded with cheap LNG imports; postponed infrastructure maintenance means more Norwegian gas is entering the UK market than anticipated; and the UK lockdown has just been extended, which is bearish for gas demand from the commercial and industrial sectors.

Meanwhile, continental European gas hub Dutch TTF has so far held up comparatively well, as some European countries such as Germany are starting to ease lockdowns. TTF last closed at the equivalent of USD 2.11/MMBtu, after losing 5.5% on Monday – a price swing that in pre-coronavirus days would have been considered dramatic.

NBP last traded above TTF on 11 March 2020, and a gulf has emerged between the two since then. The NBP-TTF spread is expected to narrow as soon as gas shippers make longer term bookings on the IUK and BBL interconnectors that span the English Channel.

However, it seems that further contortions are in the works. July-dated TTF dipped as low as USD 1.96/MMBtu in intra-day trading on Tuesday, well below July-dated Henry Hub – indicating that the so-called ‘market of last resort’ for US LNG – mainland Europe – could remain firmly out of the money over the summer.

There is no clarity over exactly how or when UK, European and US gas prices will revert to type. In the meantime, even a sci-fi teletransporter capable of zapping molecules from the US Gulf coast across the Atlantic at zero marginal cost would be losing money by selling US shale gas into any European market. 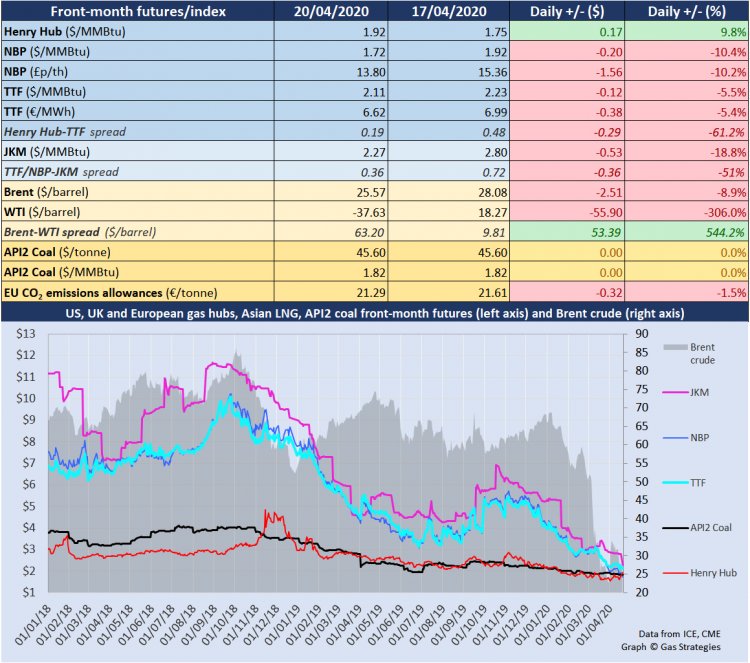