Europe has long been described as the ‘market of last resort’ for LNG. Its role as a sink market was highlighted in 2019, when the region absorbed 87.3 mt – a quarter of global imports – marking a year-on-year increase of 71% from 51.1 mt in 2018.

Amid the Covid-19 pandemic, the spotlight has fallen again on Europe’s ability to balance the LNG market as demand destruction caused by the crisis exacerbates the ongoing supply glut. To date, and despite the pandemic, the volume of LNG supplied to Europe has increased. Imports in April rose 13% year on year, with Q1 imports 30% higher than Q1 ‘19, vessel tracking data shows.

“We have seen the Covid-19 pandemic having a big impact on the European gas and energy markets,” Axpo Trading’s senior gas analyst Nicholas Boyes tells LNG Business Review. “It significantly contributes to the looseness, as demand destruction across commercial, industrial and power sectors are showing much lower gas demand already. Also, it has heavily reduced the maintenance schedules in the North Sea.”

According to Boyes, though north-west Europe remains the sink due to its flexibility in demand and supply, as well as its liquidity and diverse buyers of gas, “the price collapse has limited the attractiveness to sell there.”

For his part, Akos Losz, non-resident fellow at the Center on Global Energy Policy at Columbia University, says: “When Europe can no longer absorb excess LNG cargoes, the supply side will have to adjust as well, which we are already starting to see with cargo cancellations, deferrals, and the exercise of downward quantity tolerances in contracts.”

According to Losz, Europe may have some additional capacity to absorb surplus gas, for example “by utilising more of the spare storage capacity in Ukraine, or switching some of the cheapest lignite-fired generation in Germany to gas.” But he sees this as merely “trimming along the edges,” not a lasting solution to the excess supply problem.

One LNG industry expert believes it is “inevitable” that Europe’s gas stores will fill up, impacting on Europe’s ability to act as a sink.

In most cases, this storage is used as a buffer between the ships and the market, not for long-term storage, the expert explains.

April witnessed gas prices in the TTF, NBP and Japan Korea Marker (JKM) demand centres fall to record lows as markets priced in the worsening supply/demand situation. At the same time, Henry Hub has been rallying on the back of weak oil prices and an anticipated decline in associated gas production.

HH is now trading at a premium to Europe’s major gas benchmarks for the summer months, meaning significant volumes of US LNG exports to Europe are out of the money.

“The strength of HH against the weakness of north-west Europe will absolutely impact LNG imports into Europe as it makes a significant proportion of US LNG unviable to sell,” warns Boyes.

“We expect this to be an issue through to September, until when we see opportunities for US LNG to load and deliver into JKM/TTF M+1 indices in the shoulder months, as soon as markets transition to when demand outpaces supply/storage withdrawals season,” he adds.

JKM futures prices for June and July are currently converging with HH for the corresponding months, meaning US LNG exports to Asia are also unattractive over the summer.

“Some sellers may have hedged the price, so will presumably continue to supply until the hedges run out,” says the industry expert. “For those still lifting US cargoes, Europe must be a better option with JKM under USD 2/MMBtu.”

Like Europe, several Asian buyers took advantage of cheap spot volumes to fill storage over Q1, but their buying spree seems to have ended in April as storage sites remain brimming in Asia due to demand being dented by Covid-19. 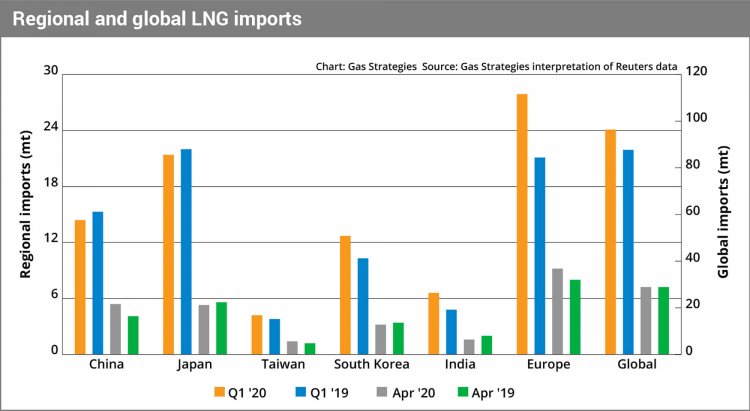 China showed a year-on-year increase in LNG imports in April, with the import resurgence partly due to a cold spell and lower pipeline imports. Some market observers suggest the country’s gas demand recovery could be short-lived as Chinese exports are likely to be hit by the fallout of Covid-19.

“In the timeframe when Covid-19 is still active, I don’t think there is any longer a single market of last resort – all markets have converged to similar price points and have reached the limit of their ability to absorb volumes,” says a market observer. “Next step to balance supply/demand in the short term is cargo cancellations/shut-ins.”

Sources agree that a supply-side response is the only way to balance the LNG market. Recent reports indicate that around 33 US LNG cargoes are expected to be cancelled in June, with cancellations also expected further afield.

“Cancellations have already been triggered, but the lead time means we won’t see the impact on supply until June, which may be too late for Europe to balance from lower LNG supplies alone. We expect to see shut-ins this summer in US LNG, in north African LNG exports, and from some south-east Asian and Australian sellers,” says Boyes.

According to Losz, US LNG is “the first candidate” for shut-ins, “not just because of the greater contractual flexibility in US contracts, but also because the relative strengthening of HH prices amid the oil price collapse is further undermining US LNG export competitiveness in an exceptionally bearish global market.”

Losz adds that for others supply sources, it is more difficult to cut back, “but we may see examples of how this can be done in the next few months as well. Some backfill projects – for example in Trinidad and Australia – could be deferred.”

In Eastern Australia, supply curtailments face complex stakeholder issues, and low transit costs to Asia can compensate for some of the cost disadvantages, Losz says. He believes that Qatar “will probably also be part of a greater supply-side adjustment – we are already beginning to see cargo deferrals and the exercise of downward quantity tolerances in Qatari contracts.”

The LNG expert also believes that mass shut-ins are “inevitable”.

“Forecasts I have seen for global LNG demand in 2020 range from 340 to 370 mt, which is around -15/+15 mt compared with 2019. It looks as though LNG supply January-April was up by around 16 mt, which means supply has to be reduced by between 20-50 mt in the last seven months of the year based on the demand forecasts.”

For now, those LNG producers whose contracts are tied to oil “have not really experienced as much of an impact – the impact is lagged and can take 6-9 months to take place,” says Anna Milkuska, non-resident fellow in energy studies for the Center for Energy Studies at Rice University’s Baker Institute for Public Policy.

“But if oil prices stay low for a long time, then those producers may have to shut-in some of its production,” she adds. “Most of those contracts are in Asia, so Asian demand recovery is also extremely important here.”

Before the pandemic, customers with oil-indexed contracts were calling for price reviews due to the price disparity with low spot LNG prices caused by the LNG glut. The demand destruction triggered by Covid-19 may add fuel to the fire as the virus has placed further pressure on commodity prices. Naturgy confirmed during its Q1 report that it is “taking steps to activate the price review of its gas procurement contracts in view of the current environment”.

“If demand for LNG recovers but the oil price does not, we might well see price reviews triggered by sellers asking for a more favourable slope based on prevailing Asian spot LNG prices,” he says.

“Given the plunge in oil prices, I wonder if we might start seeing price revision requests from those selling LNG on long-term contracts to European buyers, looking to restructure prices to give a more favourable slope. HH premiums might assist sellers to achieve that, assuming their contracts allow for flexibility in delivery – introducing the relevance of HH,” adds Sharma.

However, some market observers suggest the downward pressure on pricing caused by Covid-19 may not be enough to validate price reviews.

“The main catalyst for price renegotiations has been the periodic divergence of oil-linked and spot natural gas prices,” says Losz. “But with the recent oil price collapse, the difference is narrowing rather than widening, so the impetus for revised oil-linked pricing is weakening.”

According to Boyes, many existing contracts will find it hard to justify price negotiations “based on a market that has suffered a ‘perfect storm’ of coinciding events that could normalise in 12-18 months.”

“Besides spot LNG, oil slopes have normalised somewhat on the oil price crash. However, the move to a strong buyers’ market could suggest a stronger negotiating stance for LNG buyers,” he adds.

For her part, Milkuska says price renegotiations “can of course happen, and we probably will see those, but demand/storage is a key. If there is no demand and no storage available, lower prices cannot do much.”

The market observer believes that reviews are unlikely unless “we see something like a second wave of Covid-19 infections once quarantine is lifted.” That would imply a longer time period of supply/demand imbalance which could be used to justify price renegotiations.

“[W]e have already seen weaker sales from all three major piped gas suppliers already this summer – from Russia, Norway and Algeria, who have been exercising some of the supply side flex that makes Europe a sink market for LNG,” says Boyes.

“Gazprom in particular will need to decide at which point they start to aggressively defend market share. Year-on-year imports are down sharply. But can [Russia] simultaneously fight an oil price war with Saudi Arabia and the US alongside a gas price war with US LNG?” the market observer says.

While Russian gas flows have dropped significantly in Q1, some of this has been offset by Gazprom’s sales from European storage, where it had stored ample volumes to hedge against a potential breakdown of Ukrainian gas transit last winter, says Losz.

“The jury is still out as to how Gazprom’s European sales, including contract sales and sales via the electronic trading platform, will evolve over the full year,” Losz continues.

“Norway, interestingly, will most likely increase rather than decrease supplies this year due to a deferred maintenance program as a result of the coronavirus outbreak. Gas imports from Algeria are going down further after an already weak 2019.”

If pipeline players do decide to reassess prices, the “ramifications on LNG markets would be significant,” the industry source concludes. - ET